Sebastien Bourdais qualified the No. 18 GEICO – Dale Coyne Racing with Vasser-Sullivan car 10th for tomorrow’s INDYCAR Grand Prix on the Indianapolis Motor Speedway 2.439-mile, 14-turn road course in Speedway, Indiana. Bourdais went out in Group 2 in Round 1 of qualifying and posted a fast lap of 1:08.2670 putting him second in his group of 12 drivers advancing to the second round. In the second round he recorded a lap of 1:08.2998 putting him 10th on the speed charts which is where he will start tomorrow.

“The No. 18 GEICO Honda team made a step forward after a really tough test. The guys did a really good job bouncing back. The first session this morning was really trying, but in the second practice we improved the car. We had a feeling we were going to need a bit more to make it into the Firestone Fast 6. We made a little adjustment, but it didn’t really help the car. In the second round we picked up too much understeer, but the GEICO car is good.” 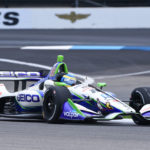