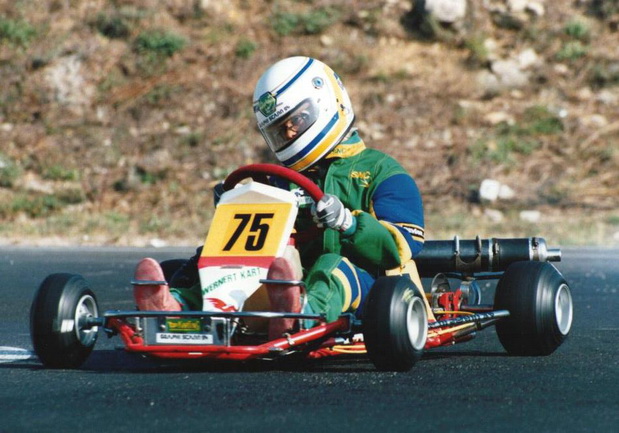 Sébastien Olivier Bourdais was born on 28 February 1979 in Le Mans, France—the cradle of endurance auto-racing and home of the fabled 24 Hours at Le Mans race since 1923. Thrust into auto-racing by virtue of his birthplace, and through his father Patrick—who enjoyed his own success on four wheels as a club racer and as a competitor in the 24 Hours of Le Mans between 1993 and 2006—Sébastien received his first go-kart in 1989.

“I remember like it was yesterday, the day I gave him his first kart,” Patrick recalls. “It was his birthday, on the Alain Prost circuit at Le Mans.” He continues: “I sensed that Sébastien was truly gifted from his first few laps, and he was rapidly turning some of the lowest times. His lines were very fluid, and he already had a good sense of his machine.”

Race results quickly proved Patrick right. Sébastien steadily climbed the steps of the French national karting hierarchy, winning the Maine Bretagne league in 1991, repeating that feat in 1993, and finishing 4th in the France Cadets Championship that same year. Even after transitioning to single-seaters at the age of 16, Sébastien kept up karting. In 1996, as part of the winning Sologne Karting team, Sébastien dominated at the Le Mans 24 Kart Race. 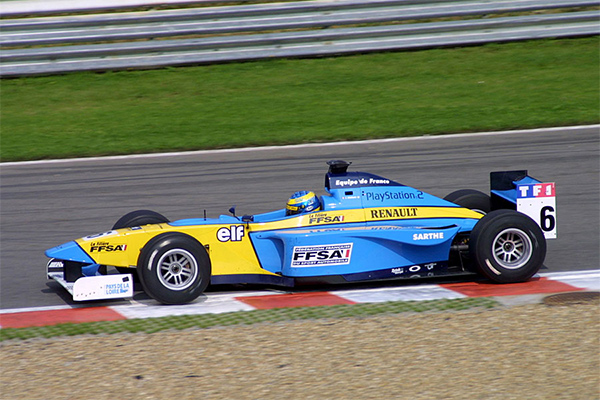 Sébastien logged the first single-seater start of his career in Formula Campus in 1995. “During a race at Dijon in Campus, Sébastien put a second between him and his competitors on a track that was wet, then dry,” Patrick recalls, “He had never driven on that track before. Yet, he won both races, starting 16th and 12th!” That day, says Patrick, “I understood that Sébastien could have a career in auto racing.”

Sébastien quickly graduated to the Formula Renault French Championship as a member of La Filière, created by the oil company Elf. A ninth-place finish in the standings in 1996, followed by a second-place finish the next year, sufficed to secure Sébastien, still with La Filière, a spot in the French Formula 3 Championship in 1998. During his rookie year in that series, Sébastien finished on the podium twice to score Best Newcomer honors and sixth in the championship. The next year he fared even better, capturing three poles, eight race wins, and first place in the championship.

Having conquered the French Formula Three Championship, Sébastien placed his foot on the next rung of the ladder: Formula 3000. During the next three years, racing for three different teams—Gauloises Formula, DAMS, and Super Nova Racing—Sébastien progressed from ninth in the standings, to fourth, to first.

During Sébastien’s final year in Formula 3000 he did double-duty as a Formula One test driver for Arrows Grand Prix International. This failed to develop into a full-time seat in the vaunted series, however, as the team entered bankruptcy before the start of the 2003 season. A second opportunity—this one with Renault—also failed to materialize. 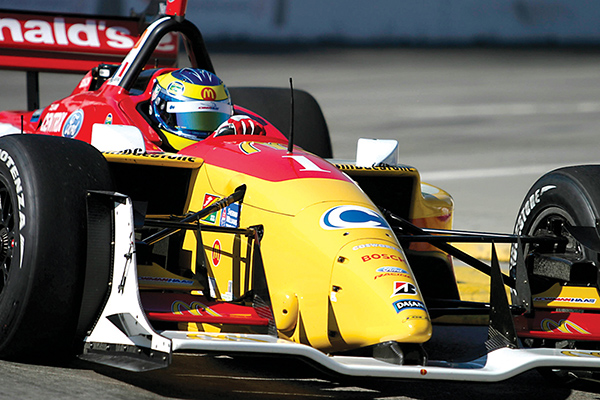 His dream of driving in Formula One deferred, Sébastien moved to the US to pursue an opportunity to race in the CART Champ Car World Series with Newman/Haas Racing. The best team in the paddock, Newman/Haas furnished Sébastien with a winning car from word go. Five poles and three wins put the rookie Sébastien fourth overall in 2003.

Between 2004 and 2007 Sébastien—still with Newman/Haas—erased from the books some of the oldest records in auto-racing. He became the first driver in the history of the discipline to win four consecutive series titles. He also set the record for the number of wins in a single season: eight, in 2007. 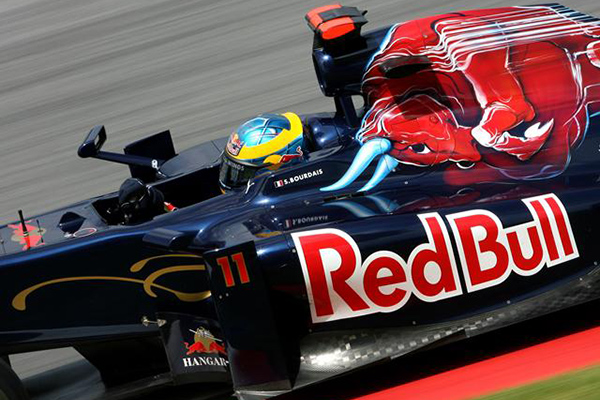 Sébastien’s success in single-seaters spoke for itself. All that remained to complete his career was to conquer the Mount Everest of auto-racing: Formula One. After Sébastien’s fruitless attempt to secure a seat in Formula One in 2003, he doubted he’d ever have the chance to compete in that series.

“In 2006 I had little hope left and I was ready to drop it,” Sébastien recalls. “Then I got a phone call.” On the other end of the line: Nicolas Todt. “He had given himself a challenge, and that was to get a French driver in F1,” says Sébastien. “He told me that he thought I was the only person able to do it correctly.”

Three test sessions convinced the principals at Scuderia Toro Rosso that Sébastien was indeed the right Frenchman for a seat. They signed him, along with a young and promising German named Sebastian Vettel, for the 2008 season.

Despite driving a year-old car, Sébastien shone in his Formula One debut, in Melbourne. Running fourth with just two laps to go, Sébastien successfully fended off Heikki Kovalainen and seasoned veteran Fernando Alonso. No doubt he would have maintained this position had a mechanical failure not ended his day two laps early!

After six races, the team unveiled a new machine: the TR3. Sébastien struggled to adapt his driving style to this new—and very fast—car. Aided by an aerodynamic update toward the end of the season, however, Sébastien qualified in the top 10 in six of the last seven races.

Thanks to his improved pace, Scuderia Toro Rosso re-signed Sébastien for the 2009 campaign. The car, however, proved quite slow and difficult to drive. Although Sébastien scored in Melbourne and Monaco, the team replaced him after just five races with Spanish driver Jaime Alguersuari to prepare for the 2010 season. 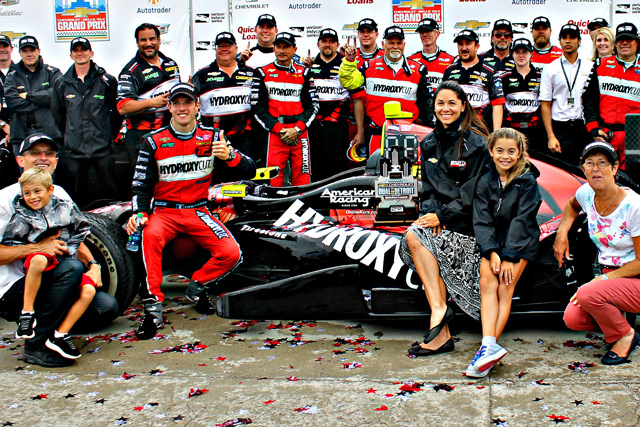 After competing in a few Superleague Formula races at the end of 2009 and beginning of 2010, and scoring a couple of successes there, Sébastien returned to American open-wheel racing when Dale Coyne Racing offered him a partial ride—road and street courses only—in the IndyCar series. “We finished pretty strong,” Sébastien recalls, citing four sixth-place finishes during the second half of the season.

In 2012 Sébastien switched to Lotus Dragon Racing for a full-season IndyCar ride on a two-car team alongside Katherine Legge. Unfortunately, says Sébastien, “Reliability was a big issue” with the Lotus engines. Mid-season, team owner Jay Penske dropped Lotus to partner with Chevrolet. For financial reasons, Penske also downsized from two cars to one—split between Sébastien, who again competed in road and street events (claiming a season-high fourth-place finish at Mid-Ohio), and Legge, who drove ovals only.

Sébastien re-signed with Dragon Racing for the 2013 season—and this time he competed in every race on the IndyCar schedule. A late-season charge resulted in six top-ten finishes, including podium finishes in Toronto Race 1 (second place) and Toronto Race 2 and Baltimore (third place). Even more impressive was Sébastien’s run at the season finale in Fontana. After qualifying in third position, Sébastien dominated the first quarter of the race. “We were in it to win it,” he recalls. Unfortunately, an on-track incident caused the collapse of the right-front suspension, ending his night early.

Dragon Racing abandoned IndyCar for Formula E in 2014. “I wasn’t really interested in that,” says Sébastien. Instead, he signed with another IndyCar team: KVSH Racing. At last Sébastien returned to winning form, earning a pole and race victory at Toronto Race 1 in 2014. 2015 proved even more successful as Sébastien drove to victory in Detroit Race 2 and in Milwaukee—a particularly commanding performance. And in 2016 he won yet another event: Detroit Race 1. This period was not without its frustrations, however. Personnel changes and limited resources frequently set the team back. “It was a real shame because I thought there was a lot of potential,” Sébastien says of the KVSH era.

2017 represented a homecoming of sorts. Sébastien returned to Dale Coyne Racing, bringing his engineers from Newman/Haas and KVSH, Craig Hampson and Olivier Boisson, with him. The results were immediate—and impressive. Sébastien won the season opener at St. Petersburg, took second at Long Beach, and remained atop the IndyCar standings for the first four races of the season. When the team—a perennial underdog—arrived at Indy to prepare for the Indianapolis 500, “the car was a rocket ship,” Sébastien recalls. Sébastien was on pace for the pole position when he suffered a horrific crash during lap three of his four-lap qualifying attempt. He sustained multiple fractures to his pelvis and fractured his right hip and various ribs. “It all came to a pretty abrupt end on that Saturday in qualifying, and that was pretty much the end of the season for me,” Sébastien recalls—although he did heal sufficiently to compete in the last three races of the season.

His injuries fully mended, Sébastien came out swinging in 2018, winning for the second time in a row at the season opener in St. Petersburg, earning a pole at Phoenix, and running a solid second in Long Beach until an unfortunate yellow ruined his race. “So far 2018 seems to be open to pretty much everything and anyone,” Sébastien says of his championship prospects. “So, to be continued!” 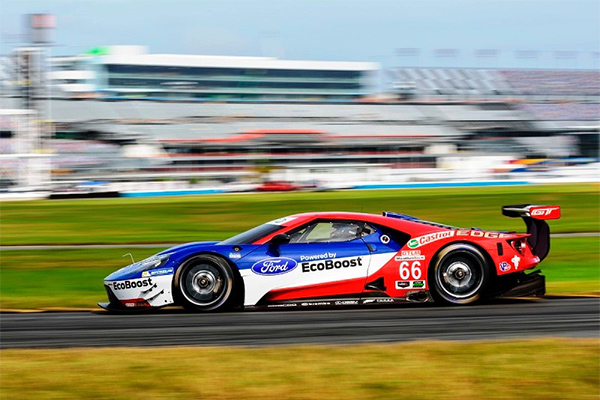 Although his open-wheel career has consumed most of his energies, Sébastien has entered several sportscar endurance events over the years. He competed in his first “around the clock” race in his hometown of Le Mans in 1999, piloting a Porsche 911 GT2 fielded by Larbre Compétition. Unfortunately, the car’s engine failed, resulting in a DNF.

The following year, four-time Le Mans winner Henri Pescarolo ran his first car under his own colors, and tapped Sébastien, along with Olivier Grouillard and Emmanuel Clérico, to pilot it. “We finished fourth with an old car that really didn’t deserve to be there,” Sébastien remembers fondly. It would be the first of five stints at Le Mans with Pescarolo—including one in 2012 driving the famous Dome.

Scheduling conflicts prevented Sébastien from competing in Le Mans in 2005, 2006, and 2008. But in 2007, and again from 2009 to 2011, Sébastien—who had signed with Peugeot as a factory driver—piloted the Peugeot 908 LMP1 car at his home track. The 2007 race represented “the start of a new program,” he explains. “The car had never completed a 24-hour race or simulation or anything like that.” Incredibly, the team finished second. “That was like a win,” Sébastien says. “It was awesome.”

Another second-place finish—this one in 2009—was considerably less satisfying. “We should have won Le Mans by a country mile,” Sébastien recalls, “except we had a mechanical issue and went three laps down.” He continues, “We recovered that within six hours of racing, so by four in the morning we were 50 second behind our sister car—purely on pace.” Then, “Audi had an issue, and Peugeot decided to fix the positions at that point. So, we lost not on the track but on a political call”—an experience Sébastien describes as “quite heartbreaking.”

In 2010 and 2011, Sébastien became a full-time driver with Peugeot. A delaminated chassis cut his 2010 Le Mans effort short following a pole position. And his 2011 run, during which he partnered with Pedro Lamy and fellow IndyCar standout Simon Pagenaud, once again resulted in a second-place finish. “Audi just plain outpaced us,” Sébastien recalls.

It must have seemed to Sébastien that victory at Le Mans would remain forever out of reach. Fortunately, that proved not to be the case. In 2016, Sébastien, piloting a Ford GT fielded by Ford Chip Ganassi Team USA and co-driven by Joey Hand and Dirk Müller, captured the win. “We came out crushing at Le Mans!” Sébastien says of the team’s 2016 effort.