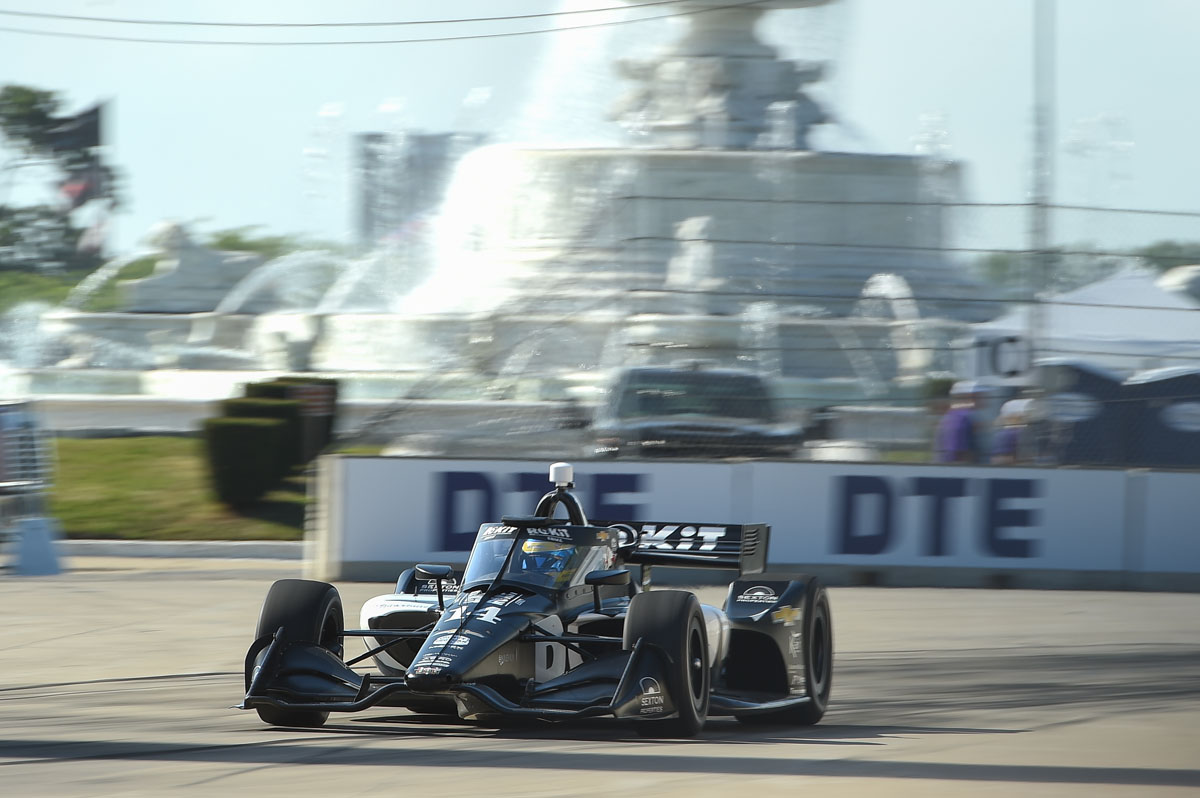 Race 1 of the Chevrolet Detroit Grand Prix was a crazy one to say the least. It took nearly three and a half hours to complete the grueling grind, which was stopped twice for accidents. Qualifying took place on race morning. Sebastien Bourdais advanced out of the first round to the Firestone Fast 12 and started 10th in the No. 14 ROKiT Chevrolet. Fuel strategies began as early as lap 2 as four cars dove into the pits to shed their alternate (red) tires and change to the primary compound tires. Bourdais told strategist Larry Foyt that the alternates were wearing fast and Foyt told him to pit on lap 5 which he did along with outside pole sitter Alexander Rossi.

The adjusted fuel strategy appeared to be working until lap 23 when the yellow came out for Felix Rosenqvist’s hard crash into the tires and concrete barrier in Turn 6. Difficulty in extricating Rosenqvist from the car (so as not to cause further injury) and the need to fix the track’s barrier, caused officials to stop the race three laps later. Bourdais, who was running ninth at the time, was caught out by the yellow along with the eight cars ahead of him. They all had to pit for fuel once the race resumed under caution. Sebastien dropped to 18th (behind those who did not have to pit) despite a solid stop.

A second red flag with five laps to go set up the strange sequence of events. Romain Grosjean crashed in Turn 9 at a narrow part of the course causing officials to throw a second red flag to allow emergency crews to remove his car safely. Sebastien was able to work his way back to 11th by the end of the 70-lapper. After the race, he had this to say: “Kind of a mixed-bag day here in Detroit for race one,” said Bourdais, who appeared to be physically drained. “We started tenth, finished eleventh, with a lot of things going on so not entirely satisfied with the result. I feel like we had quite a fast car but didn’t quite catch the breaks and got a bit of an unlucky yellow so we’ll go back harder tomorrow, try and qualify higher up and get a better day.”

Race 2 wrapped up the NTT INDYCAR Series weekend with a sunny, not humid, day on Belle Isle which made for a more comfortable race for the fans as well as the drivers. Once again qualifying in the morning, Sebastien Bourdais just missed on transferring out of the first round and started 13th in the ROKiT Chevrolet. The 70-lap race started shortly after but on the first lap, Bourdais took evasive action over the third turn curbing to avoid a driver who slammed the door on him. Bourdais lost four spots and Max Chilton took the brunt of the chain reaction accident as a full course yellow ensued. Bourdais took the opportunity provided by the caution to pit and switch out the Firestone alternate tires for primaries.

The race was going according to plan, until a miscue on a lap-18 pit stop resulted in teammate Dalton Kellett having to stop at pit out and wait until the pit stop cycle ended so the team could safely tow him back to his pit. The 14 team figured there would be a full course yellow since Kellett was in a dangerous location. They told Bourdais to duck into the pits to take advantage of pitting before the yellow. It was a gamble that didn’t pay off as the caution never came thus changing the original fuel strategy.

When it’s not your day, it’s not your day. Bourdais lost ground in Turn 3 when he had some trouble under braking forcing him into the runoff around the midpoint of the race. Although he got back on track quickly, he lost some of the ground he had made up earlier. However, he soldiered on to gain a few more spots and finished 16th.

“A promising weekend here at Detroit that still didn’t yield any kind of results we were hoping for,” said the two-time winner of this event. “I think we had quite a bit more pace than the results show, but unfortunately, all that matters are the results and we just didn’t get it done this weekend. Simply not good enough and we’re going to try and come back stronger next week.”